STORAGE TIPS
In a bag in the fridge: All veggies!

NEWS FROM THE FARM
Snow! It may be beautiful, but it’s not nice weather for working in fields.  As the season comes to a close, it’s less comfortable for our workers picking and washing the veg in these cold temperatures. They deserve a big thank you for their hard work all season, and especially now as they work through the snow and wind and freezing wash waters.

CONNECT WITH YOUR FARM
Golden Earthworm welcomes you to explore their website to learn more about our farm and the wonderful things you can do with your weekly share.

If you have questions or concerns about your share, please do not hesitate to contact the farm. That is one of the benefits of knowing where your food comes from!

Chef Demos are Back!
Have you been wondering how to use all those cucumbers we’ve received in the past two weeks? Wonder no more—CSA Chef demos return to this week‘s pickup! Chef Daphne will be on deck with some ideas for your share. Stop by for some yummy samples and tips between 5pm and 7pm.

STORAGE TIPS
In a bag in the fridge: Scallions, Fennel and Green Beans
In the fridge: Cucumbers and Peppers
On the counter: Tomatoes, Acorn & Sweet Dumpling Squash ** see note below about squash!

NOTES FROM GOLDEN EARTHWORM
What a great share this week! **A quick note on the winter squash… They should be stored on the counter, but eaten within 1-2 days. We’ve had some disease issues with these plants and have noticed that many of the squash have been rotting prematurely. So be sure to eat them right away!

Baby farmer is just starting to eat solid foods and as of last night, his favorite is the sweet dumpling squash! I would have to agree—it is absolutely delicious! The best way to prepare the winter squash is to wash the skin well and cut in half lengthwise with a knife. Scoop the seeds out of each half and place face down in a baking dish with a few tablespoons of water. Bake, uncovered in a 350F oven until the flesh is soft. Depending on the size and variety, this takes anywhere from 30-60 minutes.

CONNECT WITH YOUR FARM
Golden Earthworm welcomes you to explore their website to learn more about our farm and the wonderful things you can do with your weekly share.

If you have questions or concerns about your share, please do not hesitate to contact the farm. That is one of the benefits of knowing where your food comes from!

Save the Date:
Golden Earthworm’s Harvest Festival on Sunday, October 20th
The farm has set the date for this year’s Harvest Festival, and though it’s not until October, we would like to start gauging member interest. We’ll have a signup sheet at this Thursday’s pickup, so if you’re interested in attending, be sure to put your name down- with enough member interest, we’ll organize a bus trip to the farm, as we did last year! Stay tuned for more trip info.

Veg Share*
Butternut Squash – 1 piece
Green Kale – 1 bunch
Escarole – 1 head
Radicchio – 1 head
Broccoli – 2 pieces
Fennel – 2-3 pieces
Dill OR Cilantro – 1 bunch
Spinach – 1 large .75lb bag
Bonus! Garlic seconds – 1 or 2 small pieces (Some garlic is missing a clove or two. We are using up the slightly damaged garlic which still has many good quality cloves. The brown discoloration on some of the cloves is just on the surface and is cosmetic, although you may want to cut it off before using.)
*Contents of the share may fluctuate over the week

Lewis Waite Farm CSA Extras
Pick up your Lewis Waite orders today! Forgot to place an order? The next deadline is October 28th for delivery on November 1st. Please place your orders for Thanksgiving Turkeys by November 5th to be guaranteed a bird!!

END_OF_DOCUMENT_TOKEN_TO_BE_REPLACED

Lewis Waite Farm CSA Extras
The next Lewis Waite order deadline is Sunday, August 5th for delivery on August 9th. Anyone, not just CSA members, can order these products and pick up from our CSA. They have an amazing selection of items, all produced by small local farms.

Milk Not Jails Monthly Dairy Specials
The next dairy à la carte order deadline is Friday, August 10th at 5pm for delivery on August 23rd. Anyone, not just CSA members, can order these products and pick up from our CSA. Enjoy amazing products and support criminal justice reform at the same time.

END_OF_DOCUMENT_TOKEN_TO_BE_REPLACED

Lewis Waite Farm CSA Extras
Pick up your Lewis Waite extras today! Forgot to order? The next deadline is July 8th for delivery on the 12th.

END_OF_DOCUMENT_TOKEN_TO_BE_REPLACED

Method
1. With a sharp chef’s knife, peel the tough outer skin and cut the stems from the kohlrabi. Julienne the kohlrabi with a mandoline or sharp knife (you will have about 4 cups), and then julienne the carrot.

2. If using whole fennel seed, toast the fennel seeds in a small dry sauté pan over medium heat until they begin to brown slightly and smell toasty. Transfer them to a mortar and pestle or spice grinder, and grind them into a coarse powder.

3. Combine the ground fennel seed, vinegar, salt, pepper, and garlic and chilis, if using. Slowly whisk in the two oils. Pour over the vegetables and toss to coat. Taste for salt. Serve.

Recipe and image via Real Simple

3. Return to oven and roast until the salmon is the same color throughout and flakes easily, 10 to 12 minutes.

4. Serve immediately, with the rice, if desired. 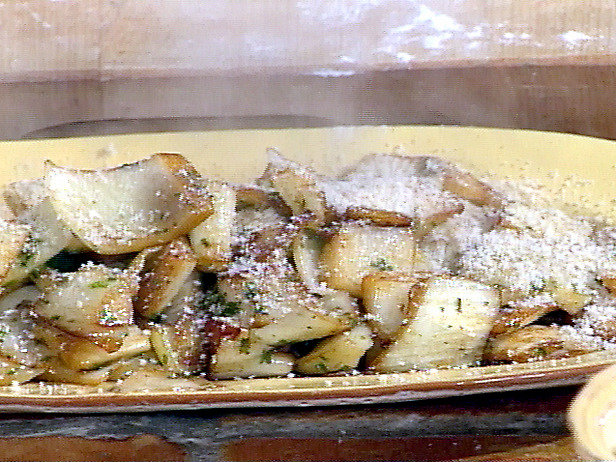 Method
1. Blanch the fennel until soft.

2. In a medium sauté pan, heat the olive oil, add the garlic and sauté.

4. Cook without moving so fennel can brown a bit. Toss gently.

5. Add vermouth and season with pepper.

6. Stir in the parsley and toss.

Fennel has a sweet, mild licorice flavor and is not to be confused with herb anise, which is grown for its seeds and sold as seasoning. Fennel is composed of a white or pale green bulb from which closely superimposed stalks are arranged. The stalks are topped with feathery green leaves near which flowers grow and produce fennel seeds.

Nutrition:
Fennel is an excellent source of vitamin C. It is also a very good of dietary fiber, potassium, manganese, folate, and molybdenum. In addition, fennel is a good source of niacin as well as the minerals phosphorus, calcium, magnesium, iron, and copper.

Storage:
Tightly wrap fresh fennel in a plastic bag and refrigerate for up to one week

Origin
Fennel belongs to the Umbellifereae family and is therefore closely related to parsley, carrots, dill and coriander.  Fennel’s esteemed reputation dates back to the earliest times and is reflected in its mythological traditions. Greek myths state that fennel was not only closely associated with Dionysus, the Greek god of food and wine, but that a fennel stalk carried the coal that passed down knowledge from the gods to men.

Cooking tips:
The bulb, stalk, leaves and seeds are all edible. Cut the stalks away from the bulb at the place where they meet. If you are not going to be using the intact bulb in a recipe, then first cut it in half, remove the base, and then rinse it with water before proceeding to cut it further.
The best way to slice it is to do so vertically through the bulb. If your recipe requires chunked, diced or julienned fennel, it is best to first remove the harder core that resides in the center before cutting it. The stalks of the fennel can be used for soups, stocks and stews, while the feathery leaves can be used as an herb seasoning, like dill weed, to flavor soups and stews.