Who’s ready for more greens?? Check out what’s in the box this week–and if you’re looking for more info or recipes, Golden Earthworm has some tasty looking ideas here. Everything on this week’s list is best stored in an airtight (plastic) bag in the refrigerator.

The veggie pickup for Thursday, June 15th will be at Sunnyside Community Services from 5-8pm.

Escarole – It looks like lettuce, but it’s not! Escarole a very nutrient-dense vegetable, and can be eaten raw or cooked. When to use: Within 5 days.

Garlic Scapes – This is the top of the garlic plant–remove the head and use the rest as you would garlic. It gives a slightly milder flavor. When to use: Within a week.

Parsley – Don’t write this off as just a garnish–it’s also great in soups, salads and juices! When to use: Within 3 days.

Baby Arugula – This is the next planing, so it’s extremely tender and best eaten raw in a salad. When to use: Within 3 days.

Red Romaine Lettuce – Romain loves the hot weather, and holds up great with heavier toppings. When to use: Within a week.

Toscano Kale – Try this one as kale chips, thrown in a cold smoothie or added to a soup. When to use: Within a week.

Please note that any boxes not picked up by 8pm will be donated to SCS, and items are subject to change.

If you find that your greens have gone “limp,” a tell-tale sign of dehydration, try soaking them in a bowl of cold water for a bit to help them perk back up.

For more tips, recipe ideas, and info on this week’s produce, check out the Golden Earthworm blog. http://goldenearthworm.com/farmblog 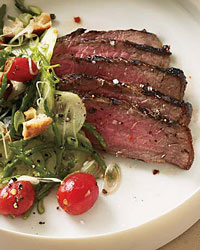 recipe and image via Food and Wine

With cherry tomatoes that are promised to “explode like water balloons and taste like Red Hots,” how can you not make this salad?

2. In the same saucepan, combine the water, sugar, salt, red pepper and cinnamon stick; simmer over moderate heat until the sugar dissolves. Strain the syrup over the tomatoes and let stand until cool, 45 minutes. Drain, discarding the syrup.

3. Preheat the oven to 350°. On a baking sheet, toss the bread with 2 teaspoons of the olive oil and season with salt and pepper. Bake until golden, about 8 minutes.

4. Bring a medium saucepan of water to a boil. Add the sea beans and blanch for 30 seconds. Drain in a colander and cool under running water, then pat dry.

5. In a bowl, toss the tomatoes, croutons, sea beans, cucumber, scallions, vinegar and the remaining 2 tablespoons of oil. Season with salt and pepper and serve.

Method
1. Preheat oven to 400°F. Wrap each beet in foil, enclosing completely. Place on rack in oven and bake until beets are tender when pierced with fork, about 1 hour 30 minutes. Cool in foil. Peel beets, then cut each into 6 slices.

2. Arrange beets, slightly overlapping, on half of large platter. Arrange cucumber slices on other half. Scatter onion in center. (Can be made 4 hours ahead; chill.)

3. Whisk honey, vinegar, and mustard in small bowl to blend. Gradually whisk in oil. Season with salt and pepper. Drizzle over vegetables. 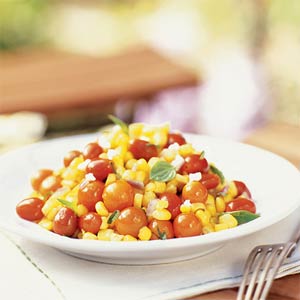 recipe and image via Sunset

I have not made this exact recipe, but Mamma’s in the East Village used to make something similar that I LOVED. The goat cheese and corn wins every time! – Jessica

You can make this salad (through step 2) up to 4 hours ahead; cover and chill. Bring to room temperature to serve. Sprinkle with cheese just before serving.

Method
1. In a 10- to 12-inch frying pan over medium-high heat, stir onion in olive oil until limp, 5 to 7 minutes. Add corn and stir often just until tender to bite, 5 to 6 minutes.

2. Pour mixture into a wide serving bowl and stir in tomatoes, basil, and vinegar. Add salt and pepper to taste. 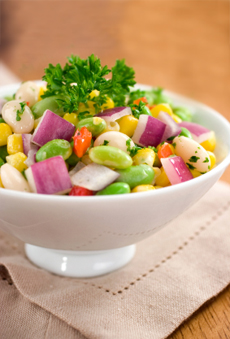 recipe via Lisa Sabin; image via The Nibble

I have made this a couple times and it is light and healthy. Yes, you are using frozen edamame, but the fresh corn makes all the difference. – Jessica

2. Toss edamame, peppers, onions, cilantro in bowl. Whisk lemon and light mayo in a cup, toss into the salad. Set aside.

3. Remove corn from oven, let cool for a few minutes. Carefully cut corn kernels off the cob. Toss corn into the bown with the other ingredients. Chill in the refrigerator.

4. Serve cold or at room temperature.

Method
1. With a sharp chef’s knife, peel the tough outer skin and cut the stems from the kohlrabi. Julienne the kohlrabi with a mandoline or sharp knife (you will have about 4 cups), and then julienne the carrot.

2. If using whole fennel seed, toast the fennel seeds in a small dry sauté pan over medium heat until they begin to brown slightly and smell toasty. Transfer them to a mortar and pestle or spice grinder, and grind them into a coarse powder.

3. Combine the ground fennel seed, vinegar, salt, pepper, and garlic and chilis, if using. Slowly whisk in the two oils. Pour over the vegetables and toss to coat. Taste for salt. Serve. 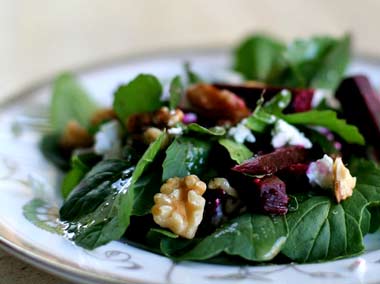 recipe and image via Simply Recipes

I make this salad with candied pecans instead of walnuts and use a bottled balsamic vinaigrette when I’m feeling lazy. – Jessica

Salad Ingredients
Beets boiled (until a fork easily goes in it, about an hour), peeled, and sliced into strips
Arugula, rinsed and dried
Goat cheese
Chopped walnuts

2. Assemble beets and arugula and dress with dressing. 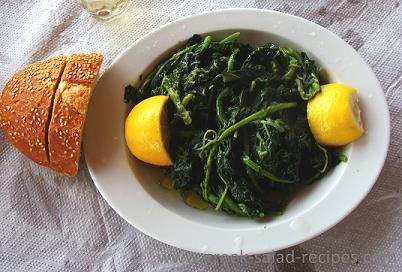 recipe via About.com; photo via Greek-salad-recipes.com

This salad can be made with spinach, beet greens, as well as greens others might consider weeds, such as dandelion greens and nettles or any dark leafy green, such as mustard greens or broccoli rabe (raab, rapini). In rural Greece, horta, is the local green of choice.

2. In a large pot, bring 1-2 inches of salted water to a boil, and add the greens. Boil for 4-15 minutes until softened and dark green, tasting to check for doneness (time depends on the greens used). Remove with tongs, squeezing out the water and drain in a colander.