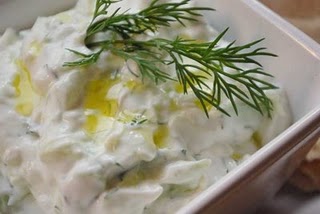 recipe via About.com; image via Joy in Creating.

For the strained Greek yogurt, just pop up to any Greek store in Astoria or possibly a Turkish place around here and I think you will find it. It is super thick so it holds up to the watery nature of the cucumber without the dip getting runny. Serve with warm large pita rounds that have been cut into trianbgles and brushed with oregano and olive oil.

2. Using a whisk, blend the yogurt with the sour cream.

3. Add the olive oil mixture to the yogurt mixture and mix well.

5. Chill for at least two hours and garnish with a sprig of of fresh dill just before serving.

If you can’t find greek yogurt (or want organic), you can make your own from just regular yogurt! I started doing this:
http://www.nytimes.com/2010/03/17/dining/17mini.html?_r=1&ref=dining
a few months back when Mark Bittman posted it in the Times. I stick my strainer over a bowl and pop it in the fridge overnight. The longer you leave it, the thicker it gets – I even make yogurt ‘cheese’ this way and it’s super tasty.